skip to main | skip to sidebar

Review spam? Who could be doing this if not their competitors?

Look at this. I found it on the tigerdirect website when I was looking for a replacement keyboard since I dropped a large 2x4 on the last one and busted all the keys in the lower left corner: 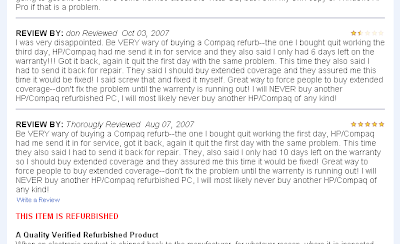 Compare the texts. There are minor differences that have very obviously been found and replaced, and there are a couple of phrases missing. Other than that they're exactly the same. All I can think is that there's some sort of review spammer who posts nasty reviews of Compaq computers. Who's doing this? Is this some sort of dirty trick by ... competitors or someone?
Posted by Jonathan Watson at 10:35 AM 1 comment:

The decision to believe someone or something is always, in the end, a moral decision. That is to say, it is not "belief" until you find you must make a decision, a decision that has consequences, based upon what you do or do not believe.
Posted by Jonathan Watson at 4:29 PM 1 comment:

In Which Richard Dawkins Does the Church a Huge Favor

What the ... ? Didn't anybody read my book? - Thomas Aquinas

As I go around shilling for Darwin I am very much aware of the large numbers of Christians whom I respect very much who disagree with me on this topic, and I'm sure that to some people this is a useless and purely divisive argument which serves only to separate Christians further and undermine the common front we ought to present against the current crop of smarter than thou atheists who gleefully, obnoxiously, and moronically write copious books and articles full of fatuous, fallacious, and philosophically laughable arguments against any acknowledgement by human beings of any power greater and more good than they themselves.

Nevertheless, I'm really, really glad that the church in the United States is having this argument, because whatever position you end up taking on the question of Darwinian evolution, the discussion gives us a chance to correct a major misunderstanding about the divine act of creation.

You see, as I talk to people, I've realized that most of us have a quasi-Greek, essentially deistic understanding of God's role as creator. That is, we think of God as having called the universe into existence some 4000 to 13 billion years ago, like a model builder constructing a vast machine, giving it its various mathematical laws. And now he sits next to it, watching over and occasionally reaching down to stick in a new animal-type or raise someone from the dead or something.

But, while this is almost inevitable given the fact that we have to have pictures to think with, and no pictures are adequate to God, it's really a serious misunderstanding of who God is and the way he works, and the beautiful thing about the evolutionists is that they're forcing us to correct that false understanding of God.

Because, contrary to what Larson asserts in my opening quote, evolution is actually not causing Western theology (or even Eastern theology) to rethink itself or drastically change its understanding of creation. But it is causing us moderns to dig deeper into the theological tradition, go back to the Church Fathers, and read the Bible with them instead of with our own cultural misconceptions.

Next post: Does God exist? (The answer's way more complicated than you think.)