skip to main | skip to sidebar

An Observation After Today's Mass

Why, oh why do old people in the church insist on Gregorian Chant and ancient hymns when it's obvious that what young people today want and need is cheesy 1970's folk music badly played?
Posted by Jonathan Watson at 1:16 PM No comments:

Requirements of a Subsidiary Community

In political discussions that occur both among friends and over the internet, I keep hearing conservative Catholics bring up the principle of subsidiarity. While I welcome the prominence the principle is getting in our country, I am frustrated by the one-sided use of its negative aspect ("no public agency should do what a private agency can do better, and that no higher-level public agency should attempt to do what a lower-level agency can do better – that to the degree the principle of subsidiarity is violated, first local government, the state government, and then federal government wax in inefficiency" - Reid Buckley), without due attention to its positive aspect: that there actually exists a level of community that really ought to accomplish these functions, and that community is not "whatever club I decide I want to belong to."

In order to be a real community that accomplishes real good and distributes real justice, a subsidiary community must have the following characteristics:

The first five characteristics belong to any community at all, I think. The last two are characteristics of specifically "subsidiary" communities.
Posted by Jonathan Watson at 12:54 PM No comments:

Aha! It's awesome when someone as hilarious and insightful as Scott Adams says the same thing I've been saying for years.... 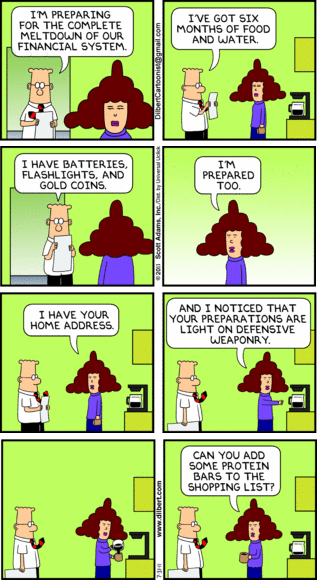 Dilbert continues to be awesome.

Posted by Jonathan Watson at 10:24 AM No comments: